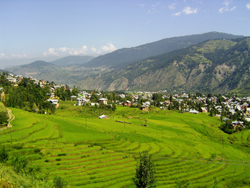 
Mission of the BDA:-

Use the potential of Bhaderwah as an intermediate tourist destination between Himachal Pradesh, Kashmir Valley and Punjab for the economic development of the region Integrated tourism development in the region to attract the tourists visiting Himachal to visit the Kashmir Valley through Bhaderwah and similarly attract the tourists visiting Kashmir valley via an alternate route from Pathankot-Basoli-Sarthal-Bhaderwah -Kishtwar-Daksum-Anantnag. Sell Bhaderwah as unexplored destination with rich religious and cultural heritage. Stretch the spatial dimension of the tourism towards the East of NH-IA and sell it as a region of adventure tourism potential. Create synergies between road infrastructure development between habitable villages and tourism development through integrated packages with Katra-Jammu and Srinagar. Divert the Pilgrim tourist visiting Shri Mata Vaishno Devi Ji Shrine and the Holy Shrime of Shri Amarnath. Strengthen and widen the pligrimages to Machail, Kailash Kund and Mani Mahesh and Bhadarwah to act as cetrifugal force for all pilgriamge activities.

Most probable spots in the Bhaderwah region that can be included in the list are:

This package can be introduced to trekkers as the Favourite trekking circuit in Northern India. Extend this list to include Leh, Sheshnag, Marwah & Warwan valleys endowed with pristine beauties in the mountains of greater Himalayas. Advocacy for stretching the tourism towards far East in the region from NH1A Provide diverse adventure and amusement facilities in the circuit Facilitate participation of the people of the region in Pligrim tourism development of the region & as a tourist destination

Bhaderwah borders Chamba district of Himachal Pradesh and Udhampur & Kathua districts of Jammu province. It borders Kishtwar and Doda tehsils of Doda district. One of advantages which has generally been ignored in planning and development of Bhaderwah and Kishtwar in the region is its proximity to the Kashmir Valley. Kishtwar is already connected to Daksum through the road which runs through the Sinthan top and the road remains open for 6-8 months a year. There are possibilities of connecting Kishtwar to Daksum via Garol and Vailu which will reduce travel time from Bhaderwah to the Valley drastically. This will also open up the possibility of connecting the landlocked regions of Wadhwan and Marwah to Doda district, albeit through the Kashmir valley. This advantage of Bhaderwah because of its regional setting at the cross-roads of the most potential regions - the Kashmir Valley - Himachal Pradesh & Pathankot - remains unexploited. The tourism planning of Bhaderwah till recently has been mainly focused on selling the Bhaderwah region in isolation of its proximity to the Kashmir Valley and Himachal Pradesh. This regional position qualifies Bhaderwah to be developed as a Gate-Way of tourism to Valley(J&K).


The strategy for tourism development

Because of the flexibility of tourism industry unlike agriculture and manufacturing which is location specific it can be an ideal tool for decentralized regional development. In case of Bhaderwah culture, heritage, nature spirituality can be packaged and provide infinite possibilities. The advantages include that the spread effects of tourism are widespread and not concentrated in urban areas. Tourism industry is labor intensive and the multiplier effect of this industry is very high (DPR, 2005). The DPR for the Development of Tourist Circuit in Jammu and Kashmir advocates the development/up-gradation of inter and intra-state connectivity and provision of efficient social and physical infrastructure as focus of development strategy. The main focus of Bhaderwah Development Authority is the development of the local area of the authority with the underlying objectives of the economic development of the authority area. Bhaderwah offers adventure, scenic and cultural tourism potential. The Development Authority envisages developing Bhaderwah as the hub of tourist activity with fixed infrastructure for tourism provided in the town and flexible infrastructure spread over plethora of places surrounding the town.

Bhaderwah has also become a hub of pilgrimage activity. The festivities start from early spring in April and first center of religious activity is the famous temple of Subernag situated at a height of 10,200 feet in Swardhar Mountains. Devotees of Lord Shiva from the neighboring districts gather to celebrate the occasion and the festivities continue for 2-3 days. This festival is followed by week long celebrations at neighboring majestic peak Roushera. This peak at 11,000 feet from MSL has Roushera Devi temple. The celebrations continue during Navratri period for 9 days and attract tourists from J&K and Himachal Pradesh.